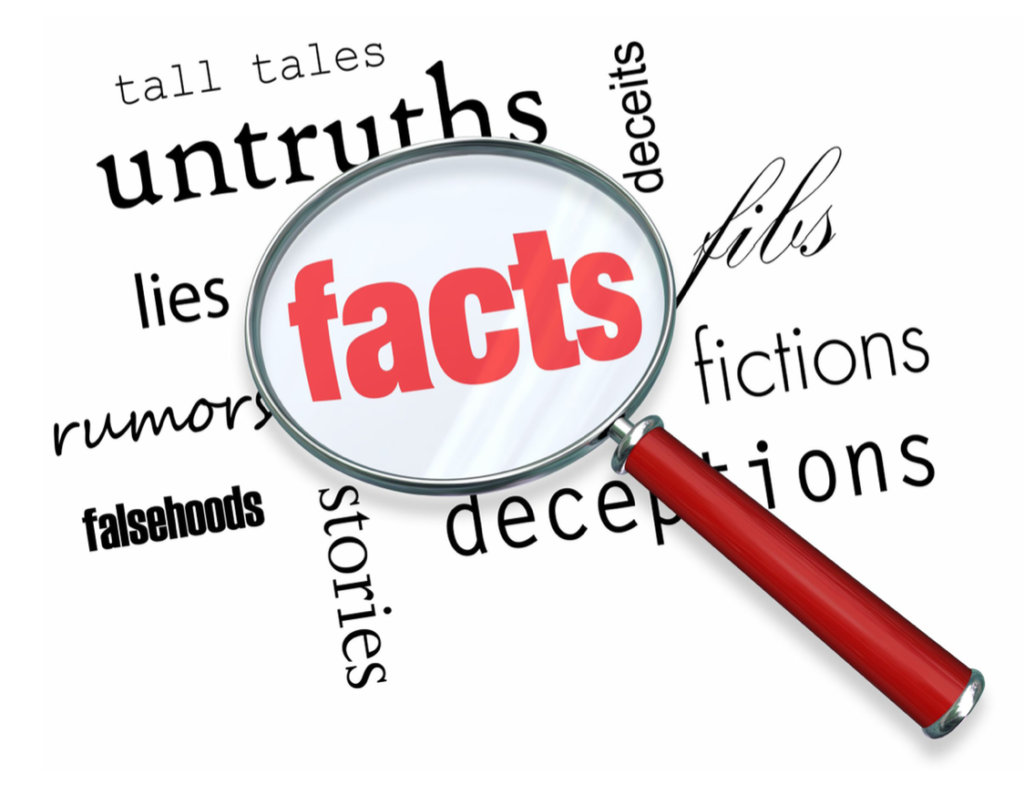 The internet is a powerful tool, but not everything that is on the internet is factual. We have compiled a list of statements found online about Richway and the Biomat® and officially answer whether the buzz is fact or fiction.  Be aware of paid-for reviews! Some companies compensate bloggers
and reviewers of products to obtain a favorable review of their products. These reviews can contain inaccurate claims and false information about competitor products. Know the facts and research thoroughly!

Claim: Other competitor mats that have different stones on both sides (top and bottom) are better because of variety.

FICTION – Having stones on either side could be a safety hazard.
Each Biomat® contains a thermal protection layer at the bottom (the side without the stones) to help keep excess far infrared heat from traveling under the mat and onto the surface it is lying on. This also means the user is receiving more of the beneficial far infrared heat.

Mats with stones on either side may not have this protection, because they are designed to be used on either side. This allows the heat to travel both up towards the user and down onto whatever surface the mat is placed on. Over time, surfaces in contact with double sided mats could be damaged more easily by the heat. Also, the user is losing more of the beneficial heat as it travels downward and away from the user.

Claim: The Biomat® only contains amethyst which makes it inferior. It needs jade, amethyst, and tourmaline to be effective.

FICTION – Through our 20 years of extensive research, we have found that amethyst produces the optimal amount of natural infrared rays over jade. The Biomat® also contains a layer within it called the TOCA layer.

The TOCA layer is a tourmaline layer, and in conjunction with the peach and grape seeds layer, allows the Biomat® to produce an abundance of negative ions.

Claim: The larger Biomats® do not contain tourmaline because it would greatly increase the cost of the product.

FICTION – As mentioned in the previous answer, all Biomats® contain a tourmaline layer within them. The Mini Biomat® includes alternating rows of amethyst and tourmaline stones to aid it in producing the same amount of negative ions as the larger mats.

Claim: You have to pay extra for a cover for your Biomat®.

FICTION – Each Biomat® comes with a cotton pad that should be placed over it to protect it and allow the heat to be evenly dispersed. Each cotton pad includes the Hideo diagram – an energy pattern which incorporates sacred geometry.

Additionally, each Mini and Professional Biomat® comes with a hard-shell carry case for convenient mobility. Single, Queen and King Biomats® come with a duffel-like bag.

Claim: Richway was issued an official warning letter from the FDA, and the company never took care of it.

Claim: All infrared, gemstone heating mats are the same.

FICTION – Not all infrared, gemstone mats are the same. The Biomat®, for example, has been evolving since 1997 and contains unique layers to provide additional health benefits to the user. The Biomat® contains the Peach and Grape Seed Layer and provides organic energy, natural far infrared, and a class-leading amount of negative ions.

The TOCA LayerTM is a tourmaline layer within the mat which provides negative ions as well, and the surface layer of the Biomat® utilizes 100% cotton fabric (not including the urethane window which shows the gemstones). The state of the art IC chip within the Biomat’s® controller controls the programming of the Biomat®. These innovate technologies set the Biomat® apart from the imitations.

" I am a massage therapist and my hands were beginning to hurt when I would do treatments. Sometimes they would also swell up and it would hurt to bend my fingers. The Biomat has changed that. I use the Biomat on my patient and receive healing myself. I am also overweight. The Biomat has reduced my pain, swelling and stress. Can't get much better than that!"

"I had chronic aches and pains throughout my whole body and I was constantly exhausted; I was stuck in stress mode. Within three months of using the biomat, my aches and pains disappeared and I finally felt I that had caught up on the sleep that I had been craving. I had mental clarity. I was totally renewed, rejuvenated, and I could sustain my energy again. Now, when I jump on for 15 minutes, any imbalances or stresses in my body are resolved quickly. The biomat has truly saved my life."

"I love my Biomat. I sleep on it all night. One hour at the top red and the rest of the night at one yellow. It has made HUGE changes in my health.My hands and feelt have always bothered me. Even with elevating them all night they would still be swollen every morning and would just get worse every day. Now- I wake up with my bones sticking out - like every other person. By the end of the day I may have some swelling but nothing like it used to be. I also have both hips replaced and a triple back fusion. The Biomat makes a HUGE difference in my pain level - pain free. LOVE IT."

"Laying on the mat gave me a great deal of comfort….I feel relaxed…Walking on clouds….Amazing experience…The mat brought calm, relaxation and good feeling….I will recommend it to everyone….Try it once and you will not regret it…Thank you!"

"As for me, I love it too. It was a wonderful tool to have access to at the Pain Clinic. I found that it gave me energy to get through day; short sessions (10-15 min.) on High Gold setting boosted my energy and eased the pain so that I was able to be present in class. It gives me hope for my future."

"I have been suffering from chronic neck and back pain for over 3 years, after being involved in an accident with a semi. I went through 10 months of physical therapy, 3 MRI's, 4 EMG tests, 36 spinal injections, a trip to the emergency, and countless prescriptions for pain and nothing seemed to be working. I was becoming desperate and depressed until I was introduced to the Biomat. After only 2 months of using the Biomat I can now say that I am pain free. It is the only thing that has helped me not only with my pain, but with my attitude as well. I love my Biomat."

"As a researcher and promoter of quality health products, I am always searching for the most effective. Personally, I am very electro-magnetic sensitive, which limits my time and use of some wonderful products. What I found most interesting with the AMETHYST Biomat is that it seems my core resistance to electro-magnetics is becoming stronger. I can go to the grocery store, use other electrical products, sit at the computer and even on the phone much longer than before, which is a true God-send. Thank You!."

I am writing this letter of testimony, to share what the Bio-Mat has done for me. Using the Bio-Mat helped to decrease body aches and other ailments like sore throat and muscle pains. I am also able to relax and sleep better at night. By sharing the Bio-Mat with my friends, it eased their body aches and pains as well. The Bio-Mat is a helpful way to relieve body ailments and I give a thoughtful thank you.

"My wife and I are very active an exercise regularly. I am a dentist and because of the nature of my profession, many times I have lower back or neck pain. We both look forward to the 30-40 minutes we spend on the Biomat to help alleviate aches and pains and in addition find that our energy level is rejuvenated. We highly endorse this product and recommend it to anyone who is very active or those suffering from chronic pain."

"I love my Bio-Mat! It's great for aches, pains and a cozy, warm place to detoxify and visualize your perfect health."

“Until I first tried the Biomat in November 2005, I relied on physical therapy and analgesics to control the pain I endured from multiple injuries I suffered over 25 years as an ironworker. I was unable to move my head from side to side without turning my upper body. Every joint in my body ached. My sister had given me the Biomat and Alkal-Life water unit to use in September 2005, but I was skeptical. She finally convinced me to try the may for my pain for a week and report to her. Each day I seemed to be getting better. I started slow and easy as she recommended and at the end of the week I was doing an hour daily on the red setting. After a few days of this, I noticed that every injury I had suffered while working iron surfaced, then gradually disappeared. I also suffer from COPD and use oxygen tanks daily. After the first week, I decided to hook up the Alkal-Life water unit. I began with an 8.5 pH. Instantly, I felt my brain clear. I guess I was getting more oxygen. I have been using the Biomat a few times a week and drinking alkaline water daily. I am now pain free ( I no longer need physical therapy and analgesics ). I have more energy. I still require oxygen occasionally when I overexert myself. I used to feel “disabled” and useless. My life is now fuller than I imagined it could ever be at my age. The Biomat and Alkal-Life Water System have greatly improved my life.”

“I first experienced the biomat at a health expo. After 10 minutes of laying on it I was amazed that it took away my hip and knee pain that I’d been unable to find relief from after several different treatments including chiropractic and physical therapy. As a pharmacist I was really impressed that it worked so much better than anything my traditional background had led me to. My experience stuck with me so when we opened a holistic skincare and cosmetics spa, I insisted we include the biomat. Since using the biomat regularly in conjunction with drinking alkaline ionized water, I have been pleasantly surprised at the improvement. I am so happy how much better I feel and how much more energy I now have. I look forward to sharing it with as many people as I can.”

Hey Jennifer, this is Debra Schamel with Reborn Organics and I just wanted to send you a statement that the Biomat is working out fantastic here at Reborn Organics.  Our clients love the therapy and it has been Doctor verified that Reborn Organics healing sessions has and is reducing cancer cells.  Thanks you so much for all your help in making our dreams come true.

“I can’t thank you enough for all the information you provided. Your customer service before and after my purchases has been exceptional.
I invested in a Biomat Professional and later the BioAcoustic mat. Prevention is key when it comes to overall health. I truly believe that over the past 2yrs of usage, the combination of these two mats has played a key role in keeping my family’s immune systems strong. My husband and 2 young children all love taking turns on the mat. When friends, or family, visit they are always encouraging others to experience our mats too. Thank you again for your unbelievable customer service and knowledge of these amazing products!
Highly recommend to everyone!

Prevention is Key with the Amethyst Biomat
Back To Website

The Bioacoustic mat is not currently available.  It will be back in stock January 2023.  Please check back later or send a message asking to be notified when it is in stock.